Welcome to this weeks P2P News, which are again tied into small content pieces. The latest news: Bondora goes Netherlands – wow, what a step.

Five to seven minutes very intense information here on my blog and on my other channels.

Keep yourself informed and share the information, which is relevant for you. So, let’s go and get updated!

Over the last two years we have seen several decreases but also increases of the P2P market volume. First it dropped, when covid hit the industry. Then there was a fast recovery including several problems and hickups. Then in the beginning of 2022 the P2P market dropped again.

Now during September we saw the second time of this year, where the overall P2P volume increased. After May 2022 it gently spiked in September from 332 m€ to 403M€, which is an increase of 21,38%. 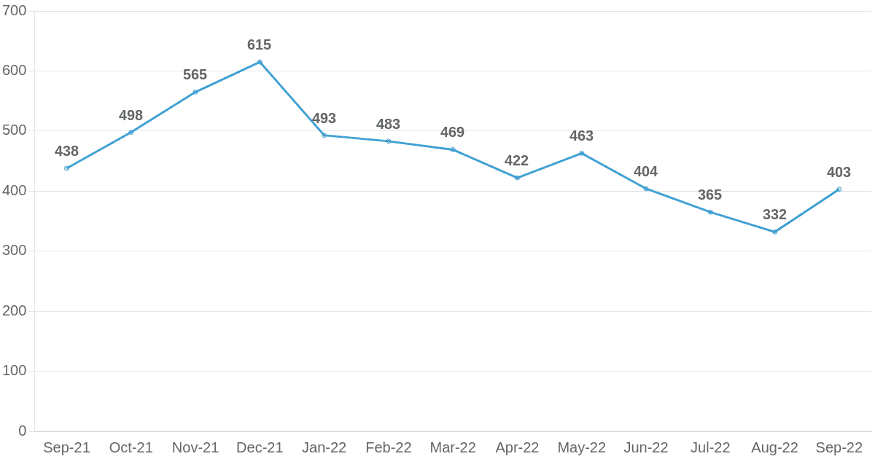 Why does this happen? Well, I do not know. But the growth comes especially from the Baltic platforms. And here have been a lot of cashback campaigns lately, where investors were able to collect some extra yield into their account.

During the last finfellas event on P2P lending a lot of platforms and marketplaces reported they need more investors, as they have enough loans for them. As a reason of this the interested was often raised and cashback campaigns tried to get investors money. Whether this trend will last longer than one month – we will see it next month.

Just like Bondora announced earlier this year, they now produced facts: Bondora now offers their service in the Netherlands. Netherlands? Never heard of them and P2P lending.

Well, there are several P2P marketplaces and platforms in the Netherlands. I personally know Max Crowdfund for example, but there are also well-known platforms who were publishing real estate loans from the Netherlands. And now it was Bondoras turn to enter the market there.

Looking some months back Bondora seems to work intensly on their growth. Lately Bondora Unlimited was established including a decrease of the interest. Again the 400€-per-month barrier was implemented for Bondora Go & Grow, which might be a sign that their increasing popularity (+2.000 new investors during September) needs more loans to satisfy them.

On their blog Bondora announced to enter more markets in the near future. During the first days of Bondora goes Netherlands more than 200.000€ in loans were generated. That looks like the start had been well prepared and the new market Netherlands is not a “we will test and see” but more a “we are here for a reason”. Well done, so now I am curious what comes next.

If you are interested in Bondora Go & Grow you will find my tutorial here inlcuding a 5€ starting bonus for you.

Another interesting country which has not been on my radar until now is Switzerland. The small country in the heart of Europe is mainly known for their wealth, their cheese and of your their mountains. And maybe for their accent I cannot really understand 🙂

No the Hochschule Lucern published a paper named “Marketplace Lending Report Switzerland”. In this study the Swiss P2P market is described. There are currently 14 P2P lending marketplaces and platforms acting on the market, which is about 14 more than I expected.

For interested investors the study has a lot of content and data to show – it is worth the time to read it. So maybe I should prepare a more detailed overview about it? Just comment below.

I had the huge honor to talk to Vitalijs Zalovs, CEO of Esketit. Vitalijs is still quite young, but offers already a very impressive journey in his CV. In our interview he talks about his way from liking numbers through his entire life to now making numbers as the CEO of a P2P platform.

Esketit is tied together with Creamfinance, which most of us will already know as a loan originator. Vitalijs himself worked with Mintos for several years, so he is an expert and has a lot of information and stories to share.

Have fun while watching. It was a great experience and I am very grateful for the opportunity to do this interview.

#5 Peerberry delivering a a good performance

We all know Peerberry for their commitment from March to repay all the loans who are affected by the Russian war in Ukraine. There are still issues to transfer money out of the country of Russia but also Ukraine, whereas it became a steady updated post on their website to talk about their efforts.

On 17th of October Peerberry announced, that they hit the 25M€ mark concerning the repayments from the war-affected-loans. That is quite an impressive number as Peerberry first calculated with about 2+ years to make all the repayment. Stay tuned how their journey will go on.

For me it is another reminder to make a first small investment here. Just like Lars wrote on his blog: “Transparancy is important, but it does not necessarily has to come from audited reports. The commitment and execution on a decision is also something which has to be taken into consideration”. Please remind, that Peerberry is registered in Croatia and offers no financial reports to their customers, which is usually a red flag for me.

Feedback on the P2P News

That’s it for today – see you again next week. If you liked the news I would be thankful to receive any kind of feedback from you. Just comment below and let me know 🙂